I can’t count the number of times that I’ve been watching a movie or show on my phone and wished that I could watch it on a larger screen. Now, it’s possible. You can cast your Android display to the TV!

Look: There are different ways for you to see your Android screen on a much bigger display. And no, it does not require you to upgrade your phone or get something with a larger screen (although nothing is stopping you from doing that either!).

So if you want the short and easy answer, buy the ever-popular Chromecast, which is an extremely easy-to-use device.

But wait! Chromecast isn’t your only option. There are other alternatives, such as using other screen cast box and screen mirroring. 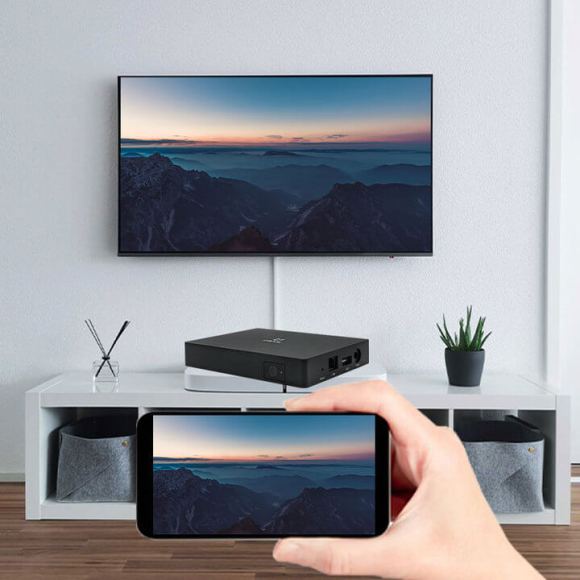 Is Screen Mirroring Different From Casting your Android Screen to the TV?

Screen mirroring, just like its name, mirrors everything you do on your phone to a TV. Casting, on the other hand, allows you to view content on another device without sharing the display on your smartphone.

Android Mirror Cast or screen mirroring, used to be a tedious process, often involving rooting your phone. Now it’s much faster, as the latest smartphones have built-in casting capabilities.

Although screen mirroring and Android casting differ slightly in their procedures, both of them let you view content from your smartphone on the TV.

So, without further ado, let’s explore the different methods to cast your Android to the TV.

Cast Your Android Screen To The TV Without Using Chromecast

As long as your phone is running Android 4.2 or higher, casting its screen to most smart TVs isn’t a problem even without the need for Chromecast or any external devices.

Just make sure that your TV comes equipped with Miracast, a wireless standard that establishes a secure link between two devices without having an Internet connection.

It is ideal if your Android device and TV have the same manufacturer (LG, Samsung, and Amazon, for example).

The screencast feature is readily accessible on your Android phone’s Quick Settings tray.

In case you run into any problems with native casting, you also have the option to download apps that make screen mirroring between your phone and TV possible.

There are many free and paid screen mirroring apps available for you to download: BubbleUPnP, LocalCast, iMediaShare, and BJcast.

As long as you install the app on your phone and smart TV, you’re good to go.

Media streaming devices have brought Android into the living room. You plug it into your TV and voila, go stream and watch all kinds of content.

These devices are excellent alternatives for those who don’t own a smart TV. While I’m listing ways in which you can cast your phone display without Chromecast, there are other streaming devices for you to consider.

Roku, which is the pioneer when it comes to streaming devices, offers an easy way for you to see your Android screen on a bigger screen. The stick itself has built-in screen mirroring options, so all you have to do is enable it.

BiJie Box is a wireless display box that can Share anything to any screen, in any room, from any device.

AirPlay on Samsung TV: how to cast from your iPhone or Mac

Using AirPlay 2 on Samsung TVs is a no brainer for any iOS user with a Samsung screen. There are times when watching content on the small screen of your iPhone, iPad, or Mac just isn’t enjoyable. Read more…

How do I use AirPlay with my Roku streaming device?

How to choose wireless display device

Wireless projection device is a kind of device that can share the picture and sound of a device to the large screen. The simple understanding is: small screen becomes large screen. The common situation is: Read more…