BJCast > BLOG > TECHNOLOGY BLOG > How to Use Miracast on Windows 10

What is the difference between
Miracast and WiDi

Miracast is a standard for wireless connections from devices (such as laptops, tablets, or smartphones) to displays (such as TVs, monitors, or projectors), introduced in 2012 by the Wi-Fi Alliance. It can roughly be described as “HDMI over Wi-Fi”, replacing the cable from the device to the display.

On 29 October 2012, Google announced that Android version 4.2+ (from updated version of Jelly Bean) are supporting the Miracast wireless display standard, and by default have it integrated. With Android 6.0 Marshmallow, released in 2015, Miracast support was dropped.

Wireless Display (WiDi) was technology developed by Intel that enabled users to stream music, movies, photos, videos and apps without wires from a compatible computer to a compatible HDTV or through the use of an adapter with other HDTVs or monitors. Intel WiDi supported HD 1080p video quality, 5.1 surround sound, and low latency for interacting with applications sent to the TV from a PC.

In Intel Wireless Display version 3.5, the Miracast standard was supported up until it was discontinued with 6.0.

So we can see, the WiDi on Windows is supported Miracast standard. and the WiDi has also supported  User Input Back Channel (UIBC) support to allow for human interface devices (touch screens, mouse, keyboard), and Inter mouse cursor protocol.

How to use miracast on
Windows 8.1 and Windows 10

First you need a device that supports Miracast Sink (receiver). Now some TVs or projectors have this function built in, or you can buy a wireless display device similar to us BJ62.

To wireless display your screen 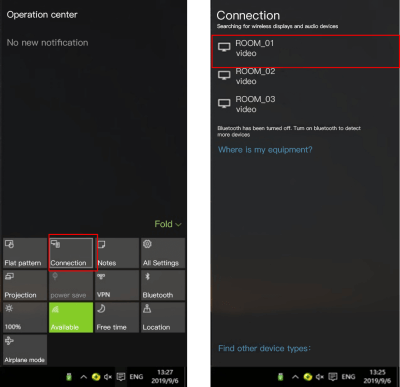 To choose what you see on each screen

Tap or click Project, and then choose one of these options:

Disconnect from a wireless display

BiJie can supply Miracast SDK or WiDi SDK which supports UIBC and Intel Cursor. We also can supply SDKs of other Wireless Display protocols such as Airplay, DLNA, Google Cast.

At present, BiJie Networks has established cooperation with hundreds of well-known companies and institutions in the world, including Haier(SEHK: 1169) , JD.com(NASDAQ: JD) , 58.com(NYSE：WUBA), PetroChina(NYSE: PTR), MCC, Accenture(NYSE: ACN), Osram(FWB: OSR) and many other industry-level head enterprises.

how to use Miracast Android on Android devices

We have learned on how to use Miracast device to mirror the android screen on the windows display. But miracast is on available on the android devices With Android 4.2 Jelly bean and also on Read more…

How to display on TV

How to display on tv Although there are more and more things in our mobile phones, such as wonderful photos and videos, etc., the screen of mobile phones is too small to be shared by Read more…

Comparison between BJ60S, BJ62S and BJ72 BJ60S, BJ62S, BJ72, and BJ80 are wireless display devices developed by BiJie Networks. All devices are commercial-grade products, which are mainly used in enterprises and education. So, what are Read more…